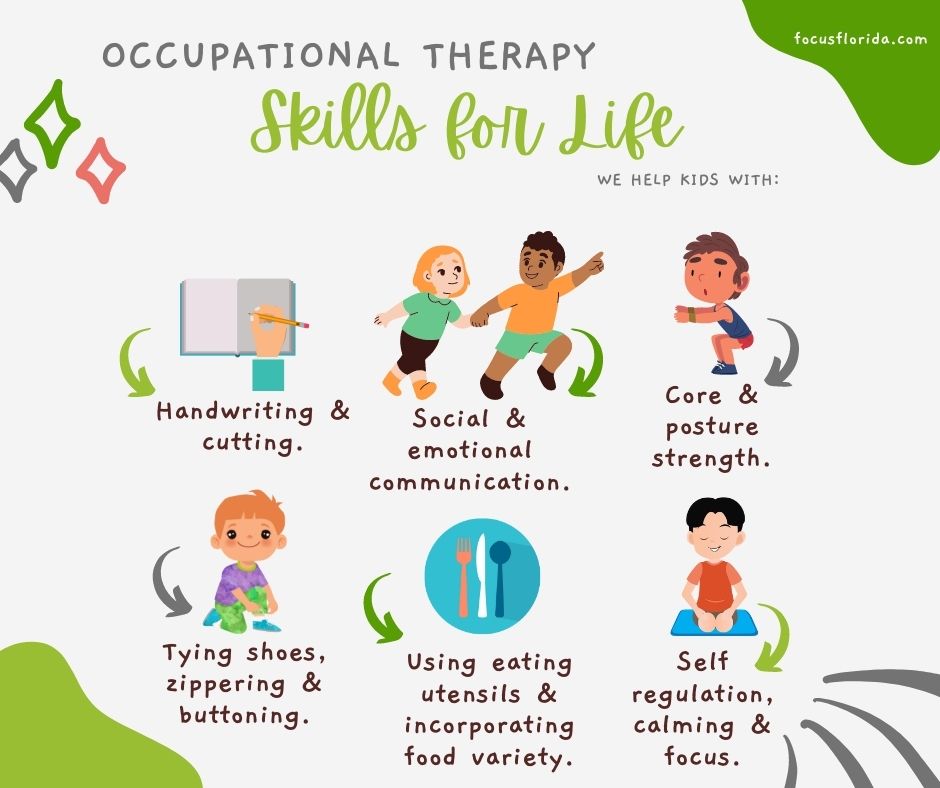 Occupational therapy is a broad discipline. Some parents are confused when they’re referred to “OT” by their child’s pediatrician. After all, the first thing that comes to mind when we think “occupation” is “job.” And kids don’t have jobs… Right?

In fact, children are tasked with a dizzying number of important jobs, spanning far beyond just learning to talk and walk (which in themselves can be pretty daunting milestones, especially for children with certain delays, disorders, and different abilities).

Occupational therapists – particularly those who work in pediatrics (with kids) – are responsible to:

A pediatric OT session may look a lot like goofing off (another reason the field – and its necessity – are met with confusion). But the play-based approach is deliberate. You know the saying, “Time flies when you’re having fun”? Play is what keeps kids engaged and interested, motivated and willing to push themselves just a bit harder every time. The most effective occupational therapy sessions are those that don’t feel like work at all for the child. This is rooted in mountains of evidence showing that it works.

END_OF_DOCUMENT_TOKEN_TO_BE_REPLACED 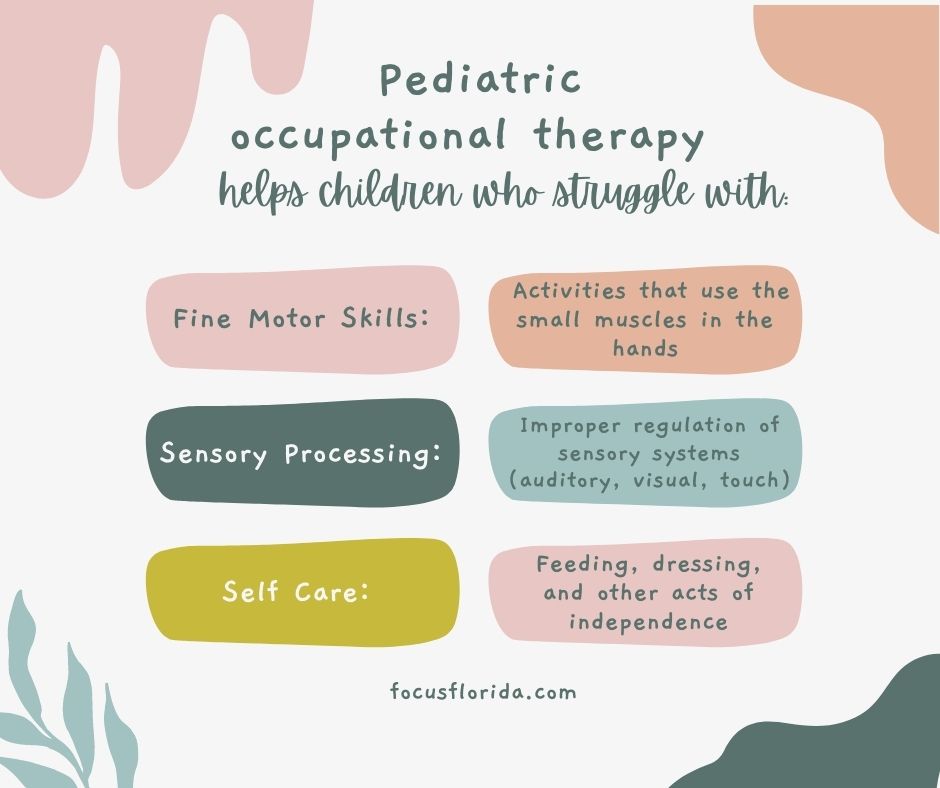 Pediatric occupational therapy isn’t widely understood by most folks. After all, kids don’t have an “occupation” do they? (In fact, they do – it’s play & learning!)

Occupational therapy (or OT for short) is a broad discipline that can cover a lot of ground for kids with a wide range of delays, disabilities, injuries, and other challenges. Pediatric OTs are professionals who work specifically with infants, toddlers, and school-age kids to help them develop critical life skills that will boost their overall development. At FOCUS Therapy, our occupational therapists want these kids not just to function,  but to thrive!

Signs your child might benefit from an assessment by a pediatric occupational therapy professional: 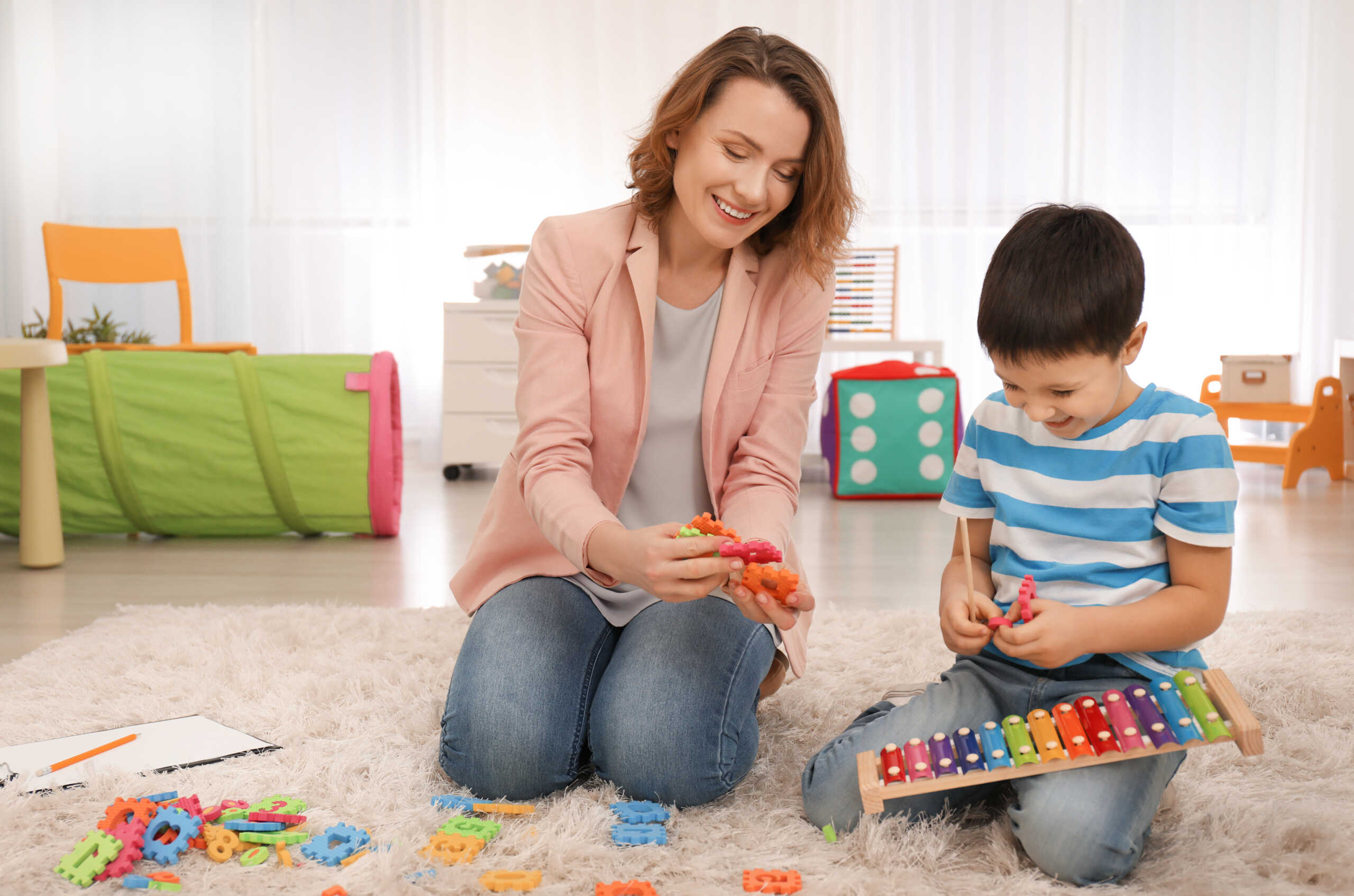 Fort Myers Occupational Therapists: Learning to Be Flexible is Key for Kids With Autism

Autism is a neurological condition characterized, in part, by restricted, repetitive patterns of behavior, interests, or activities. Someone with autism may insist on adhering to the same routines and rituals – and any attempt at changing the slightest element can set off a major meltdown. But the fact is: We live in an ever-changing world. As Fort Myers occupational therapists, one of our primary goals when treating children with autism spectrum disorder is to teach them flexibility.

Flexibility is the quality of being easily bent but not broken. It’s not a natural skill for any of us. Think about your reactions when events take a sudden, unexpected (and unwanted) turn. But the ability to be flexible is what allows us to move on from the big emotions of that and continue with the task or the rest of the day.

Change is just an inherent part of the world we’re in. Lots of kids with autism struggle with this – and often for seemingly very minor things. Helping them learn to get themselves “unstuck” is critical for functioning in daily life.

END_OF_DOCUMENT_TOKEN_TO_BE_REPLACED 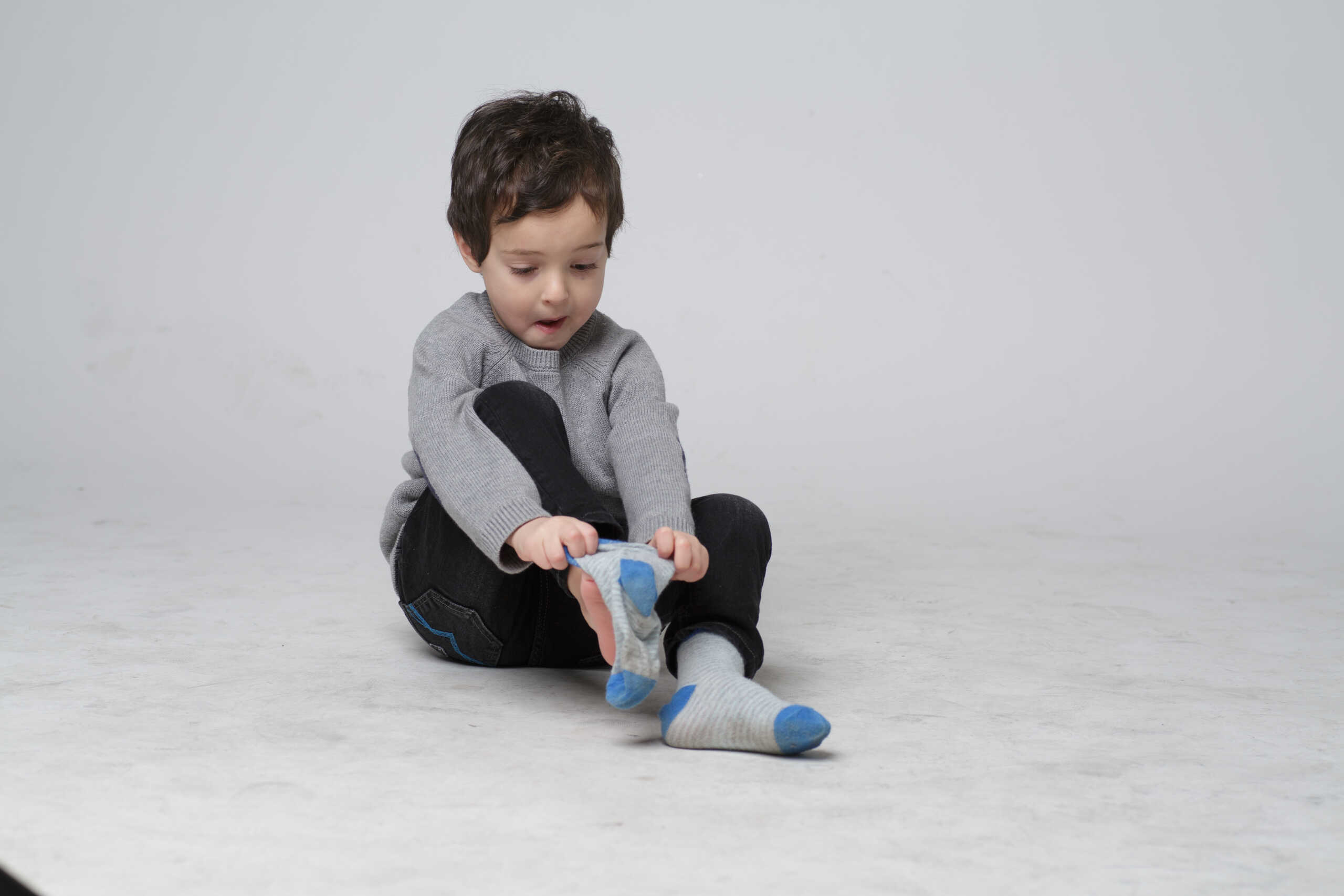 Put a Sock on It! Occupational Therapy Tips for Donning/Doffing Socks

For many kids, learning to independently put on their socks and shoes is an important early childhood skill and major milestone. It’s an important indicator of emerging independence and self-care, and it also lays the foundation for planning and sequencing of more complex skills. But our occupational therapy team knows it can also be difficult to learn.

Several skills are required for one to be able to put on/take off their shoes and socks, including:

All of this to say: It’s something that takes some baseline skills and practice! Children with delays, disabilities, injuries and other challenges may find it even more difficult to master if they struggle with:

END_OF_DOCUMENT_TOKEN_TO_BE_REPLACED 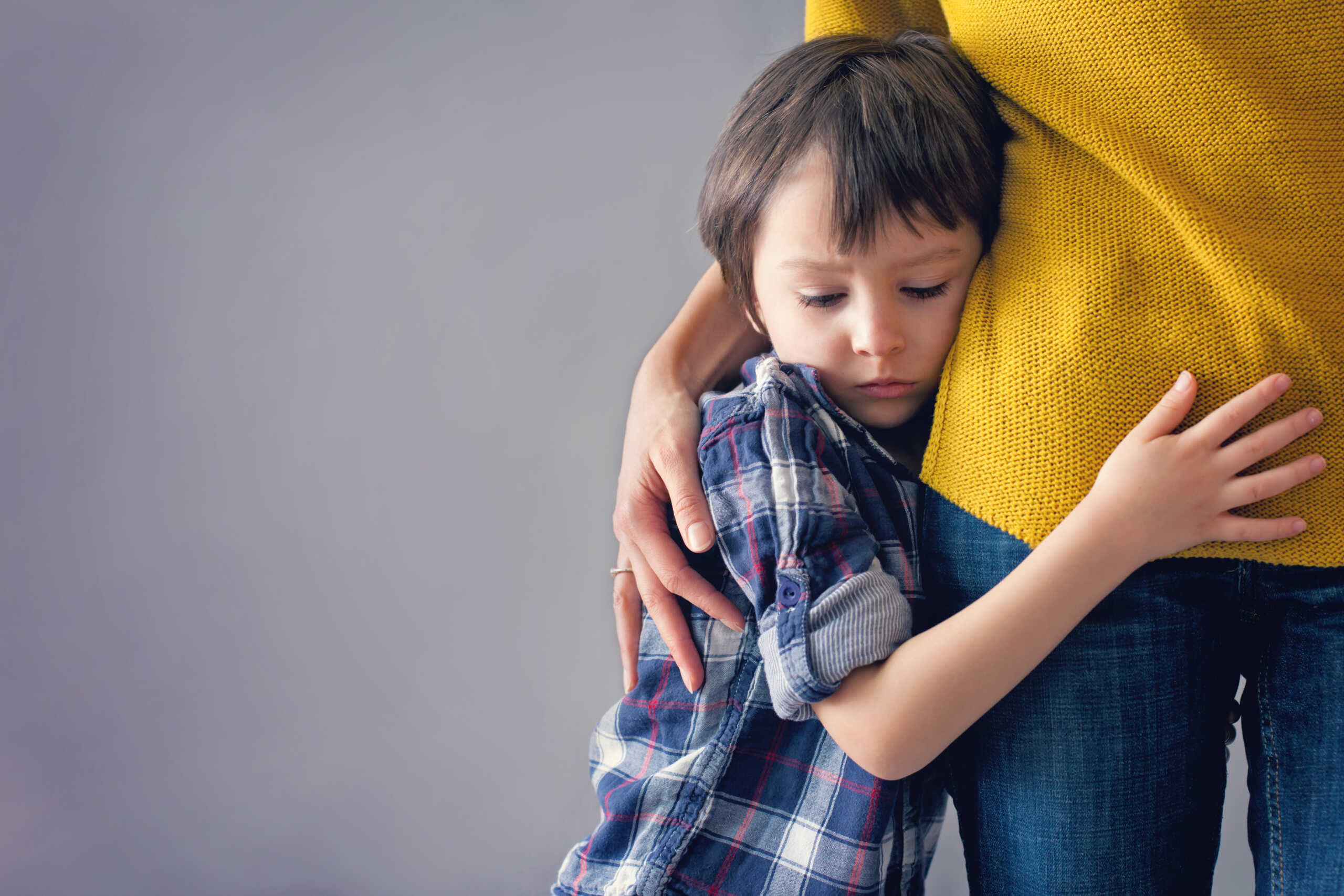 In occupational therapy, we tend to see our mission as helping children succeed. However, we also recognize that it’s equally important to teach kids how to fail.

That may seem strange, but the reality is failure is an inevitable outcome for everyone at some point or another. The size of the failure may vary, but knowing how to better tolerate will reduce meltdowns, anxiety and social difficulties (which can exacerbate the initial problem). Perhaps even more importantly, kids who know it’s Ok to fail sometimes are less likely to give up – and more likely to try new things! Ultimately, knowing how to self-regulate and cope with failure sets your child up for success in the long-term.

This point was underscored several times by NBA great Michael Jordan, who throughout his career spoke about the importance of losing. Resilience and perseverance in the face of challenges are a huge part of what has much him a winner, he’s said.

“If you’re trying to achieve, there will be roadblocks. I’ve had them; everybody has had them. But obstacles don’t have to stop you. If you run into a wall, don’t turn around and give up. Figure out how to climb it, go through it, or work around it.”

Helping kids figure out ways to climb it, go through it and work around it are a huge part of what our FOCUS occupational therapy team does every day. Self-regulation is a big piece of that puzzle, particularly with children who are diagnosed with delays, disabilities and other challenges.

END_OF_DOCUMENT_TOKEN_TO_BE_REPLACED 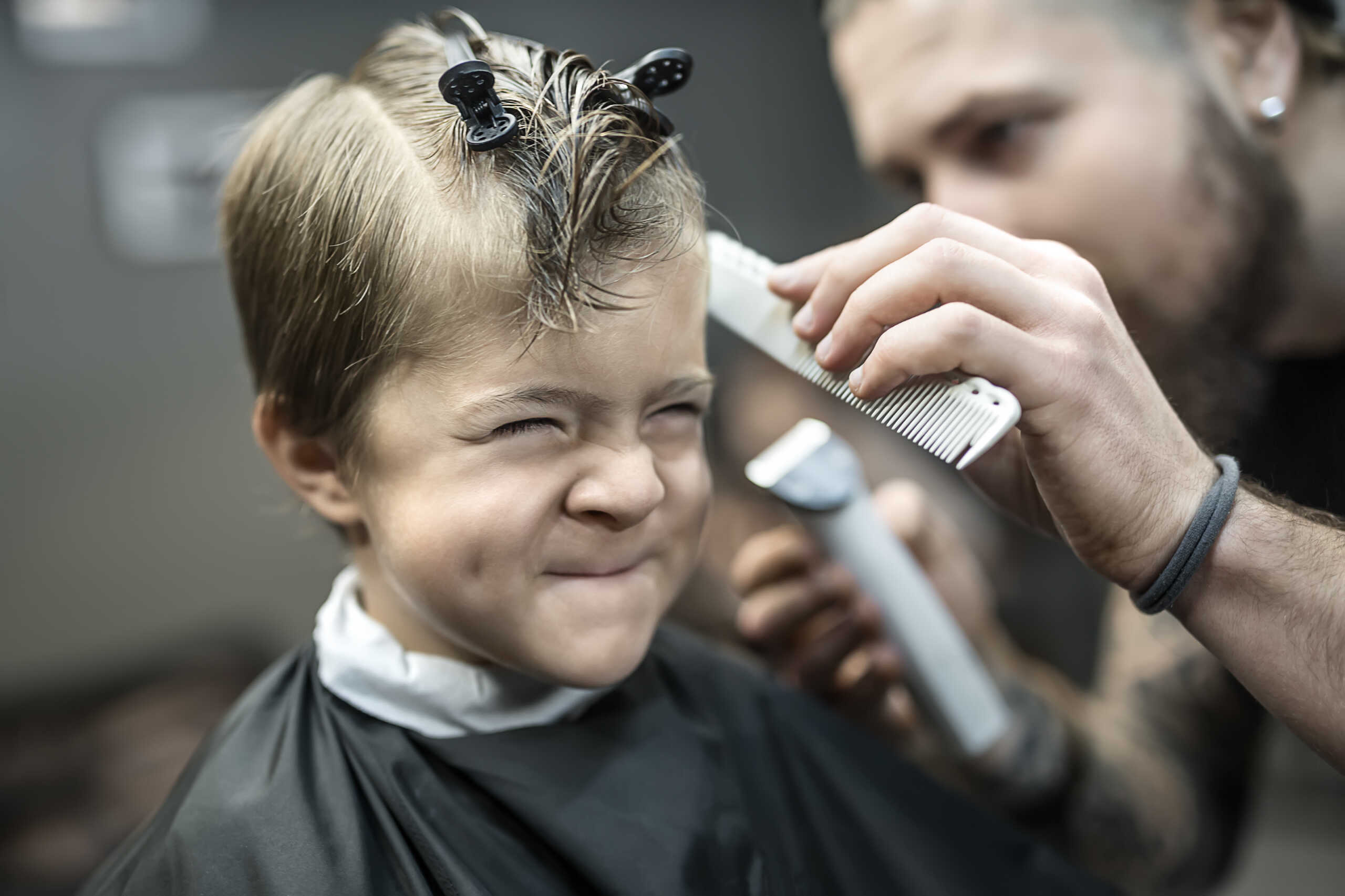 One of the most important things we do as pediatric occupational therapists is help educate, support and strategize with parents to give kids all the tools they need to be more fully involved in the activities of daily living. Haircuts are a part of that – but a lot of kids extremely dislike them. There is ample research to support what many parents of children with autism already know: More than 96 percent of kids with ASD report hyper- and hypo-sensitivities to certain stimuli. That can make something seemingly simple like getting a haircut an overwhelming experience. Our Fort Myers OT team has tips to help you before your child’s next trip to the clippers.